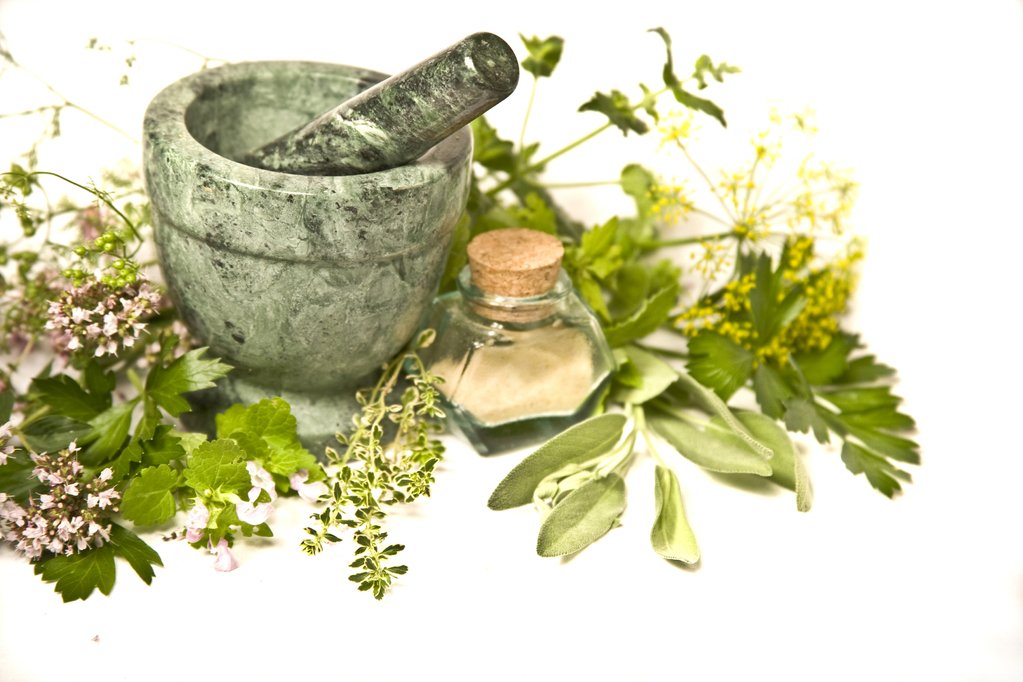 As discussed in part 8, food is an important part of your strategy to generate energy. Quality in choice of food is nearly as important. You can review this in more detail in my post about building the foundation of natural health on solid ground- part two. However, the quality of the end product when it comes to food is highly dependent upon the soil in which it is grown. This is because  many soils have become depleted, especially the large commercial farms, through the use of chemical fertilizers which are commonly referred to as NPK (Nitrogen-Phosphorous-Potassium) fertilizers.

After the war ended the need for ammonium nitrate the source for nitrogen needed for bomb making dropped off significantly. However, the capacity to produce ammonium nitrate still remained as did a surplus of this chemical.

According to Wessels Living History Farm in York, Nebraska:

When World War II started, the government constructed 10 new plants to produce ammonia for munitions. All were located in the interior of the country. Several of the plants were built alongside natural gas pipelines so they could use the gas as raw material for their production. By the end of the war, these new plants and the old ones were producing 730,000 tons of ammonia each year, and had the capacity of producing 1.6 million tons.

The question was what were the commercial interests going to do with all that nitrogen producing capacity? The answer came in the form of nitrogen-rich fertilizers for growing crops. The bigger the farm, the bigger the customer and quantity required.

Hence, after WWII nitrogen fertilizer production really took off. It appeared to work quite well too. Yields and vegetable size increased since nitrogen stimulates the leaf growth of plants in particular because it is needed in the process of photosynthesis.

Phosphorous, another chemical in the NPK formula, helps to encourage root growth and promotes blooming. Potassium (the K of the formula) contributes to the size, shape, color and taste.

While these three chemical nutrients are essential and plants could not survive without them, they are not the whole story. Plants also need organic minerals as well. As noted by Feeco 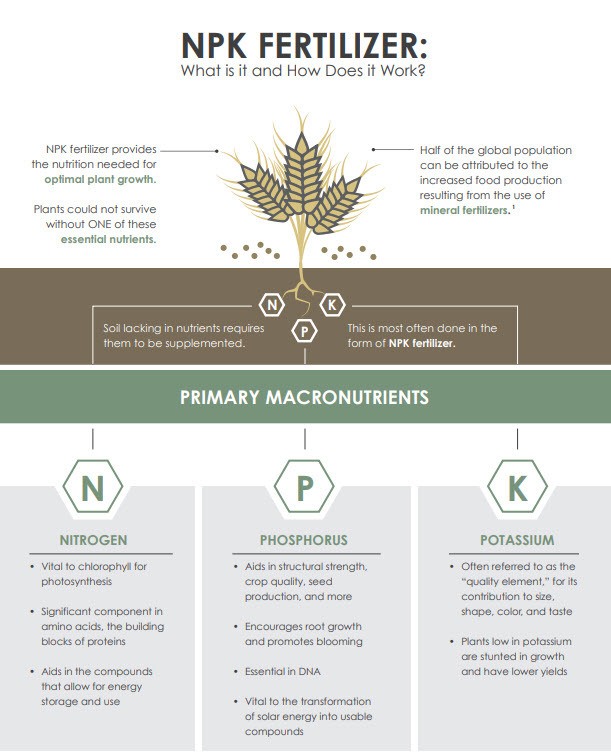 International, an which provides equipment for agriculture since 1951, there are both inorganic and organic sources for the NPK sources in fertilizer. Inorganic are most common because they are cheaper and easier to produce in abundance especially after WWII as noted above.

This is one of the reasons organic produce is priced higher. In order to qualify as organic, organic fertilizer containing an appropriate amount  of NPK nutrients is created from composted matter. Additionally, the best composted matter is produced from a variety of sources since the more nutrients there are in the raw materials, the better the compost.

Since the advent of NPK fertilizers, most commercial soils have become mineral deficient because of the reliance on synthetic fertilizers for these primary growth nutrients. However, the not only lack organic forms of these three nutrients, but they are missing key micro nutrients and minerals such as calcium, magnesium, sulfur as well as boron,  chlorine, copper, iron, manganese, molybdenum and zinc.

While these micro nutrients and minerals are not needed in as large an amounts as nitrogen, phosphorus and potassium, they are still important for our overall health as they help to complete important processes.

For example, magnesium alone is involved in more than 600 biochemical reactions in your body. Every cell in our bodies needs it to function. It is important in energy creation, protein creation, gene maintenance, muscle movements and nervous system regulation to name a few. Other minerals are important in other ways.

However, these minerals need to be replaced in the soil when crops are grown because plants pull them out of the soil to produce their own healthy growth. If these micro-nutrients are not found the soil, they will not be found in the food produced from that soil. Plants don’t manufacture micro-nutrient minerals. They absorb them from the soil from which they are converted from inorganic form to organic form by microbes (bacteria) in the soil or worm droppings as well.

Another component of healthy soil is that it has both an abundance of worms, as well as microbes. Both are necessary for healthy plant growth. Synthetic fertilizers do not contribute to the growth of soil microbes and, in the long run, healthy plants either.

While they may have the appearance of health, looks can be deceiving. Lacking many of the minerals that our body needs for biochemical reactions, plants don’t get what they need to properly develop to a robust condition. Since they are not as healthy, they are more susceptible to insect infestation. This has given rise to the pesticide industry because of the additional need for pesticides to protect the less than healthy plants.

Once, high tech farming using chemicals was fully embraced, it was not a huge leap to move towards growing animals using a chemical based technology. This farmers felt would reduce costs and increase yields too. This led to what has become known as CAFO’s (Concentrated Animal Feeding Operations) or feedlots for livestock. Animals were then grown like vegetable crops with synthetic and grain-based feeds to stimulate quick, weight-gain as opposed to pasture grazing which requires more land, pasture land cultivation for feeding and thus more cost. Additionally, this use of concentrated feed as a food source eliminated the need to have to graze or allow livestock to roam to find their food over pasture or farm land.

Now, animals could be grown like vegetables. Kept in confined areas and given the primary nutrients to enable to grow quickly and be slaughtered. Just like with vegetables, there were side effects. The animals like the plants did not develop properly and became sicker, faster. Hence, the introduction of large scale use of antibiotics which has had a side effect on human beings in the form of super bugs which are resistant to antibiotics developed from the low doses given to animals.

Additionally, there are also impacts on the environment as well, as a result of the excess animal waste from the concentration of animals in limited space. Ground water contamination is high. The previously mentioned antibiotic problem. Even air pollution.

So, once again there are side effects from high tech commercial farming which has led to overall lower quality food sources for the human population and even environmental issues.

The Role of Supplements

Now, you may be asking yourself what has this got to do with supplements for energy. Well, essentially everything. As you can figure out from the above narrative, synthetic fertilizers were an 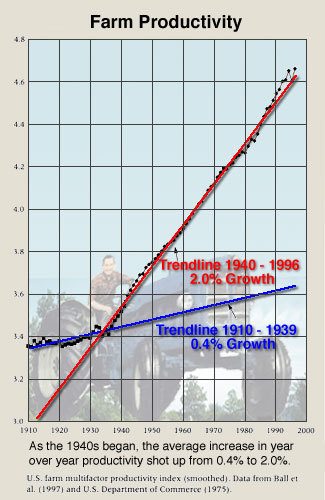 outgrowth of war surplus and essentially an economic decision, not a health related one.

Not that all was bad with synthetic NPK fertilizers. There was a strong increase in yield production because the synthetics were cheaper and stimulated crop production as the chart from the U.S. Department of Commerce from 1975 and 1997 Ball et al figures shows. That is the upside. As with any man-made solution to natural events, there are side effects.

The Downside to NPK

The upside was increased productivity and lower cost for both the producer and the consumer. The downside as you can see from up above were:

The combined impact of all these factors has led to a less than healthy human population. Some, usually with a dog in the hunt as they say, may question that. However, the commonly used computer programming term GIGO (garbage in-garbage out) capsulizes the overall, long-term contribution of large scale commercial food operations on human health.

If you are growing crops on nutrient deficient soil, they will be missing important minerals. If it ain’t in the food, it surely will not be in the plant or in us either. We get our nutrients primarily from what we absorb in the form of what we ingest.

If you are growing animals like vegetables on a limited diet laced with synthetic chemicals and antibiotics, you are producing an inferior grade of food which spills over to the health of the human consumer.The facts speak for themselves.

In recent decades, the cost of taking care of human beings has sky rocketed because our populations health is not improving but rather declining. Deficient soils producing crops leading to nutrient deficiencies and fast foods or processed foods (TV dinners, frozen dinners, microwave meals and the like) do not contribute to good health.

There have been studies correlating the increased consumption of prepared foods with a rise in obesity. Some studies have been done on the topic although funding for such studies is generally sparse because of Agri-Business influence.

Authors like Michael Pollen (The Omnivore’s Dilemma: A Natural History of Four Meals and Cooked: A Natural History of Transformation) introduce a few simple rules which can be useful like quality counts and eat food- mainly plants. Pollen’s emphasis has general application with helpful suggestions for producing better health worth pursuing that apply to all dietary regimes.

In short, the downside to NPK fertilizers is a chain of side effects leading to nutrient deficiency and ultimately illness. Hence, the need for a booster shot of nutrients to assist our overall health and help us to produce that endless energy we are looking for. There are an abundance of supplement claims, I’ll introduce only a few that I consider essential in giving you the biggest bang for your buck so to speak. Quality will also be a primary consideration.

Now that we have a basis of the need for some carefully selected supplementation to fill in the gaps left by our present food quality, let’s take a look at some recommended supplements that will help you to produce energy safely which you can use regularly without fear of side effects.

Start at Part One   Move on the Part 10- Recommended Supplements