Why Natural and Organic Solutions? Part 5

Thus far, we’ve talked about modern medicine- its astronomical costs and poor results and myths like the magic bullet myth. Now, let’s summarize this introduction with a comparison of allopathic medicine (modern medicine) and the natural approach.

The prefix “allo” means other. “Pathic” relates to disease as in pathology.

Allopathic medicine then is a method of medical treatment that uses remedies/treatments that produce effects different from or incompatible with the dis-ease being treated.

This began and continues with synthetic medications, giving rise to what is today called- Big Pharma. Surgery, while part of modern medicine, was already existing as its own treatment modality when the medication approach arose and is a separate discipline.

Early “rationalists” like René Decarte (1596-1650), Isaac Newton (1642-1727) and William Harvey (1578-1657), pushed the pendulum swing in medical treatment towards the mechanistic approach of understanding the human body and disease. They promoted the idea of studying the parts in order to learn about the whole.

In the field of medicine this led us to study our bodies in terms of organs, then of tissues, then of cells and of biochemical processes. Finally, leading to treating the symptoms of the body parts in isolation, in place of an imbalance of the body as a whole.

Allopathic medicine has fully embraced that concept. It focuses primarily on symptoms because it is fully embedded in the camp of the rationalist, mechanistic, materialist philosophy.

Under the allopathic view, the body as a whole is broken down into countless, isolated parts. The patient’s body is viewed as a machine which is separated into component parts, and treated on that basis. The idea being that if you fix the broken part, the machine will run smoothly once again.

Role of the Allopathic Doctor 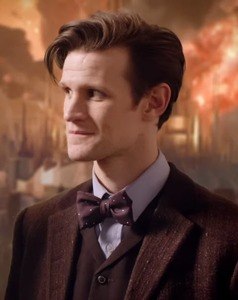 The Allopathic approach has been based throughout its history on the concept that the physician is wholly responsible for the healing. This would be similar to a viewpoint of a mechanic who repairs your car. In this scenario, the doctor is viewed as responsible for rescuing the patient.

The patient’s primary responsibility is to follow the doctor’s orders implicitly. In turn, the patient relinquishes their responsibility in the process of getting well to the doctor. Modern doctors have been convinced, through their education, that they knew more about curing the body than nature does.

Modern medicine, with its symptom focused viewpoint, seeks to eliminate the symptoms because the symptoms are viewed as the disease.

In the very early days of this approach, major interventions including bloodletting, and strong elements such as sulfur and mercury were used to route out or eradicate the disease symptoms.

Since then, synthetic medications have become the primary treatment modality. However, unavoidable in this approach is the subsequent weakening of the body which has been attempted to be glossed over with the next concept- the magic bullet theory.

Advent of the Magic Bullet

The magic bullet concept in medicine arose when antibiotics were found to be effective against certain bacterial pathogens.

In 1928, Sir Andrew Fleming, made the serendipitous discovery in his lab that the product of a mold was able to stop the growth of the staphylococci bacteria.  Pretty much from this point on, arose the drive to come up with a “pill for every ill” which eventually morphed to include all disease small and large.

This eventually led to the allopathic belief that the disease is stronger than the body. So in modern allopathic medicine, the best way to overcome disease is to supply it with synthetic helpers which give the body the power it needs to overcome its symptoms.

Limitations of the Magic Bullet

Problems, not usually acknowledged, arise when this approach is applied to illnesses. One is that there is no such thing as a magic bullet which I discussed in part 4 of this series.

A second issue arises when you encounter problems that are not infectious, as in the case of diseases which are degenerative like many modern diseases such as cancer, heart disease, diabetes, arthritis, osteoporosis etc.

A magic bullet to correct degenerative disease doesn’t work because these disorders are systemic. This means they have impacts which are comprehensive and not necessarily limited to one location or system.

Of course, modern medicine would like us to believe that they can discover the “magic bullet” which you will pop to take care of the problem with all of their drives for cancer cures etc.

However, let me suggest that this is one of the major factors why degenerative disease numbers continue to rise. That is, medicine is using the wrong approach in addressing them.

It has been my experience, and of many who have stepped outside the allopathic box to work with alternatives, that there are approaches to disease which are safer, less costly and in the long run more effective. I suggest that we should adjust our thinking towards the consideration of other models of disease treatment.

As medical costs skyrocket and degenerative disease continues to rise, more than any other time in history, we need to relearn how to cooperate with the body’s restorative powers rather than supplement them with synthetic chemicals. We additionally need to study and understand how our beings are reacting to our external environment and what can be done about it- both internally and externally. 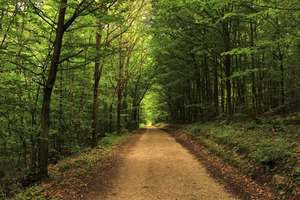 The natural model is an approach which believes in treating the whole person- mind, body and spirit.

Natural solutions to health care promote the belief that all three elements of a human being (mind, body and spirit) must be considered together in order to achieve any notion of ‘healing,’ rather than focusing on treating a person’s symptoms alone.

Nature based treatments then may typically take into consideration the entire body-mind complex, rather than focusing primarily on physical symptoms alone.

In the natural belief system, illness and injury are viewed the result of disharmony in the mind-body-spirit, which are seen as one integrated whole.

The disharmony can arise from a dysfunction in any one of these areas. Natural medicine believes that a dysfunction in one area reflects the whole person rather than just the area of the body where the symptom arises.

The Symptom in the Natural Model

A symptom in the natural model, is viewed as the reflection of an imbalance in the whole, not the primary cause.

Under the natural model, symptoms are not seen as the disease but rather as the body’s way of reacting to an imbalance. In the natural model- treating the symptom alone, while it may provide temporary relief, will lead to greater imbalance sometime in the future because it has not addressed the cause of the imbalance.

So, while a symptom may have been temporarily quelled or eliminated- the cause has not.

For example, a skin disorder such as eczema should not be confined to treating the skin surface alone.

Rather, the causes for skin disorders involve other organs like the intestines and also engages nutritional factors, including the person’s dietary intake and their level of stress. So, to approach this problem with a topical ointment or medication dose not eliminate the disorder but rather only quells, at best, the symptom.

The focus in the natural approach is on discovering what creates health, in place of focusing on the symptomatic imbalance.

Natural approaches see remedies and treatments as facilitators of the innate healing systems of the body- rather than the sole cures for the disease. Consequently, natural treatments tend to boost the immune system with nutrition, herbs, supplements, minerals, and other natural remedies.

These help the body heal itself, almost always without damaging side effects which essentially weaken our health by producing other symptoms which entail additional symptomatic treatment. This is why some patients have so many medications that they need special apps on their smart phones or modular pill carriers to address the proper intake of all of their meds.

The natural approach, as previously mentioned, views the human body as an integrated whole. This holistic point of view also takes into consideration how the person interacts with their environment and vice versa. Consequently, symptoms are also viewed with consideration given to the impact of the environment on the person like stress, food quality, air and water pollutants, pesticides, living environment, chemicals, etc.

Essence of the Natural Model

The natural model sees the healing force as being present within the body. Disease represents a body out of balance which has reached the point where it can no longer maintain homeostasis given the level of toxicity, deficiency, or neglect. Hence, we should honor the body’s innate restorative powers by cooperating rather than interfering with it.

This means we should focus on keeping it well nourished and free of accumulative toxic load. Therefore, the role of natural methods is to assist the body to return to a natural state of homeostasis by cooperating with the body’s efforts to heal itself.

The natural model also stresses prevention as well as treatment. Allopathy, by its focus on symptoms, emphasizes treatment rather than prevention.

Another factor influencing the treatment emphasis in modern medicines is that allopathic institutions employ a lot of people. In turn, they require a great deal of money to continue operations. Focusing on prevention is somewhat akin to dividing a house against itself as Jesus put in Matthew 12:25-26. Over time, the house (in this case institution) would not stand.

A personal example of this happened to me some years ago. I was meeting with a specialist for her opinion on a specific issue.  The physician mentioned some dietary and supplemental alternatives. When she was in the hallway asking for the literature to give to me, I overheard her male assistant telling her, “We’re not supposed to give that out.” I was never given the alternative treatment information.

As discussed earlier in this report natural methods rarely, if ever, have harmful side effects.

They work to detox the system, on the cellular level, and support cellular recovery to normality by using whole and live foods, vitamins, minerals, enzymes, selected herbs, natural supplementation and other natural treatments.

In this way the disease condition is naturally, gradually rejected and not permitted to co-exist in a healthy biological terrain.

Natural remedies work because they correct the underlying cause of the condition. They do not work by suppressing symptom of imbalance with unnatural synthetics which, by their foreign nature in the natural body produce unintended and unpredictable adverse reactions, aka side effects.

The table below is a brief,  but probably not fully comprehensive (I’m sure I missed something.), summary of the differences between the allopathic and natural models: 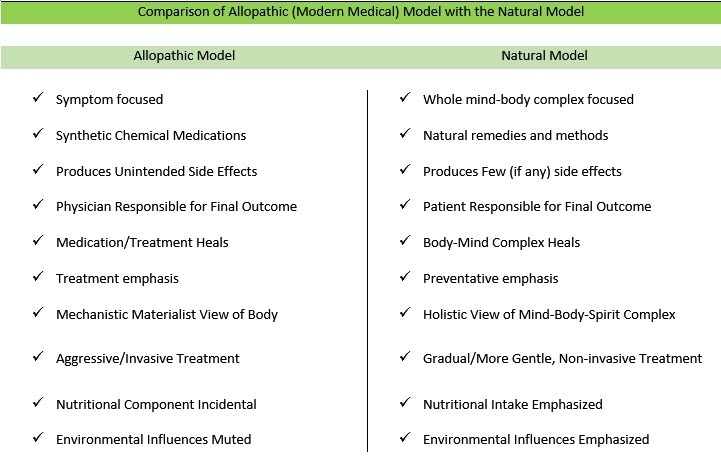 In this overview of modern medicine and the natural way of addressing health related issues, I hope that I was able to communicate an idea of what you should expect from this site when a solution to a variety of health issues or when a remedy/supplement is suggested.

You can expect that It will fall under the guidelines suggested in part 5. The subsequent parts of this introduction suggest why I believe the natural method is the least invasive, costly, needed and more comprehensive alternative to modern allopathic methods.