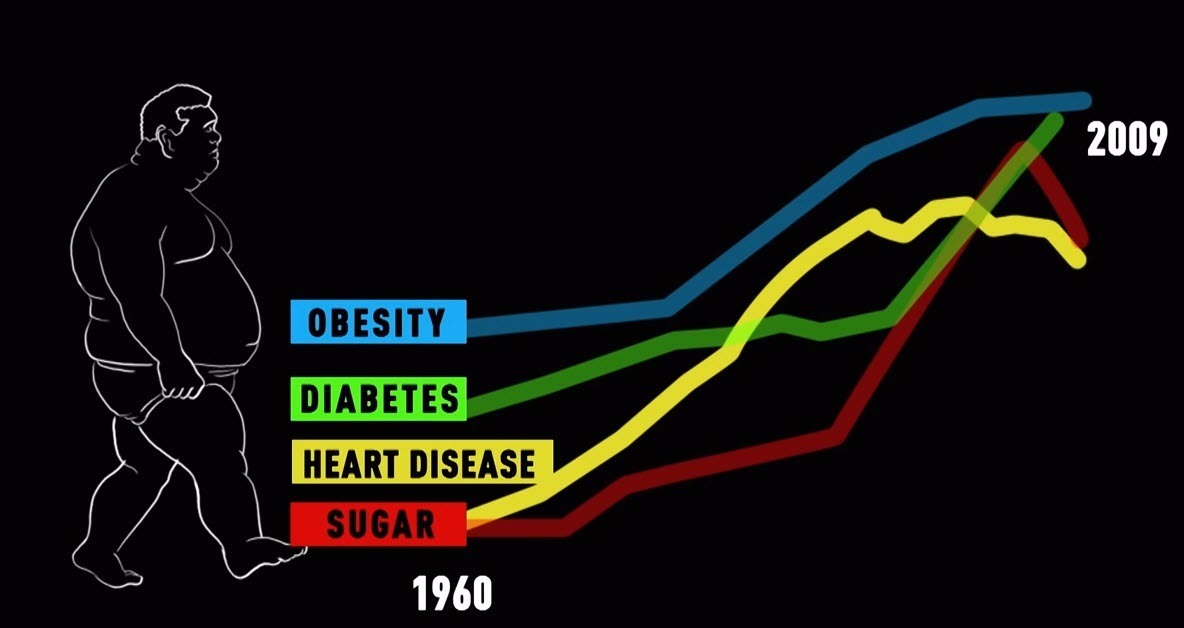 People are rightfully concerned about the opiate epidemic. Could it be that a more insidious drug is being unknowingly consumed that is killing us just as surely and in greater numbers than opiates?

Would you like to produce degenerative diseases like diabetes, heart disease, and even cancer? Do you think being obese is something to shoot for? If those targets are part of your life goals, then keep eating sugar.

Thirty years ago or so, the food craze was to remove fats from your diet. Low-fat was the buzzword found on labels all over the place. It was supposed to make us all healthier and lose weight as well.

Did degenerative disease fall? Did obesity drop? The short answer in both cases- nope!

In fact, obesity and degenerative disease continued to rise. Childhood obesity became a major concern. Meanwhile, in Canada where this documentary was made, the average person consumes 26 teaspoons a day.

The official dietary recommendations (which I still think are high)?

Sugar, including the newer form of fructose, began to surface as a culprit.

Today, we know better. Do you? If not, then you need to watch this CBC presentation. Your life could change in the process.

The Breedon family in this presentation, only in their mid-20’s, with two children had their eyes opened to how much sugar they were consuming. Dad’s breakfast cereal portion alone provided him with 20 teaspoons of sugar.

They consented to medical tests which showed that Dad was pre-diabetic. Committing to make changes, the family removed sugar-filled foods from their household.

The family received education on healthy cooking and made changes. Watch the documentary and see what happened.

Perhaps the easiest way to understand the impact of sugar is to think of it as an inflammatory. Concentrated sugars, in all forms, tend to have an expansive effect on our bodies.

People tend to gain weight (in addition to its fat building from excess) and expand their waist’s with excessive sugar intake. People wishing to lose weight should reduce their concentrated sugar intake as they are otherwise only fighting against themselves.

People with biological-inflammation related diseases should strictly reduce or avoid concentrated sugars in their diet to aid their recovery. These diseases include diabetes, heart disease, and even cancer. Alzheimer’s disease has correlations with excessive sugar intake as well.

Once you understand concentrated sugars in all their forms as an inflammatory food, its impact on your body will become much more apparent.

About Those Ever-Present Food Additives- 101

Previous Post Four Tips to Help You Make Sure That Your Supplements Are Safe Next Post Protein – Which Is Better for Your Health – Animal or Vegetable?